Yet it seems there’s a lot more to the common honeybee than first meets the eye, or at least what buzzes past the eye as it ambles from blossom to blossom. Here are some interesting facts that you may or may not know about the summertime pollinators. 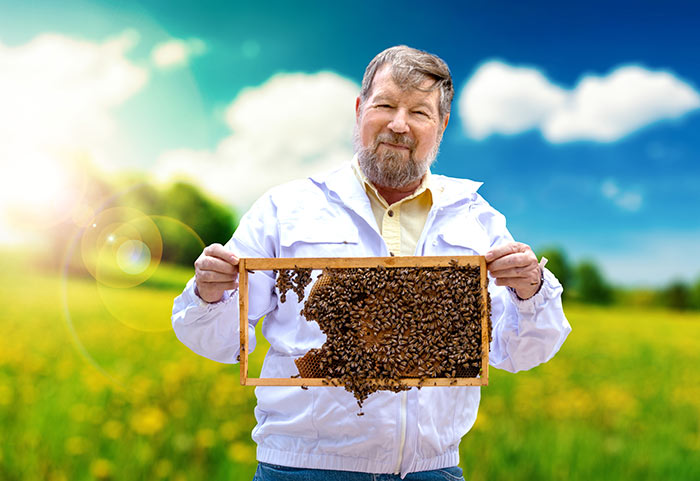 If there is one thing to be said about bees, it’s that they are true patriots. Their undying loyalty towards their leader is paralleled by very few other living creatures. The reverence they hold for their queen is astounding, and they’ll go through any obstacle in an effort to protect her.

Even when they can’t directly reach their royal highness, they will do the next best thing – as seen in this incident in Wales where a swarm of bees shifted the entire occupancy of their hive to the rear-end of a woman’s parked car when the queen became trapped in the boot. The swarm was thought to consist of more than 20,000 bees, all of which continued to follow the poor lady’s car all the way home even after they had been removed by beekeepers.

They have built-in air conditioning and heating systems

Aside from enabling them to fly, and making the well-known buzzing noise, honeybee wings do actually serve another purpose. Bees can flap their wings to fan the hive when it gets too hot. There are also “heater bees” who help do the opposite in chilly conditions, pressing their bodies against the cells and using their wing muscles to transfer heat.

They do this as often as they need to so that they can maintain the temperature within the right range. For the larvae to properly develop, the hive temperature needs to be kept between 32?C and 35?C.

They have to dance for their food

Bees use their bodies as a compass to tell their fellow drones about food sources nearby. They do this by performing something known as the waggle dance.

When a forager returns to the hive, they will let the others know what they’ve discovered and where it is by moving in the shape of a figure-eight. During their circular movements, they will rapidly waggle there abdomen in the direction of where the food is in relation to the sun. If the forager waggles while facing vertically up the honeycomb, it means that the flowers they have found are straight towards the sun. If the waggle is done facing 90? to the left of the comb’s vertical angle, then the other bees will set off in a right angle to the left of the sun. And so on.

The foragers are required to always adapt their orientation so that it remains relative to the ever-changing position of the sun. A pretty clever system for such small insects.

It’s not just honey they make

So, you know that they provide us with honey, and you know their role in the ecosystem as the pollinators of flowers. But did you know that bees produce another natural product that benefits us humans? It goes by the name of propolis. It is a resinous substance that bees collect from plants. They use this substance as a sort of cement while building their hive, sealing up any cracks in the walls and making them waterproof. Propolis also has antimicrobial properties and can protect the hive’s interior from harmful germs and any other foreign contaminants.

The natural antibacterial effects of propolis have been used in medicine. More specifically, it has been found to be very good for the skin. It is thought to have been first applied by ancient Greeks, to treat abscesses, and by ancient Egyptians, who used it as an embalming material. Nowadays, it’s mostly used to help cure the visible effects of the HSV-1 virus, also known as cold sores.

In fact, It’s been proven to be such a useful remedy against symptoms of the HSV-1 virus that many cold sore creams, such as this one, swear by its effects and have incorporated it as a special ingredient.

So the next time a cold sore sets up its unwanted residence on your face and you immediately reach for the ointment, try choosing one that has been made with a little help from the bees.

They are on the decline

Ending on a bit of a sour note, it seems that honeybees are rapidly vanishing. Not only is the population on the downslide, but the exact reasons why this is happening are posing a perplexing mystery to scientists across the globe.

There are a few main suspects: parasites, pesticides, and a shortage of food.

The most problematic mite, given the appropriately ominous name Varroa destructor, can bring down an entire colony if it attaches itself to just one bee. The pesticides used by farmers and gardeners to combat pests such as these can then have an equally damaging impact on bees. The changing landscape from rural land to more urban areas has also meant that colonies have struggled to find suitable food sources.

The phenomenon, coined as colony collapse disorder, has concerned the United Nations, who have issued a warning that a loss of the world’s pollinators will lead to a large sting in agricultural revenue. With 75% of the world’s food crops partly dependent on pollination, the loss of bees is certainly cause for alarm.

The dwindling number of honey producing hives has also got beekeepers worried, so support your local beekeepers by buying their honey!

You can help be part of the solution to bee decline by avoiding using pesticides in your garden as much as possible and planting flowers that bees are most attracted to, such as lavender, daisies, and marigolds. Doing this will help keep our buzzing buddies around for longer ? and we certainly need them to.